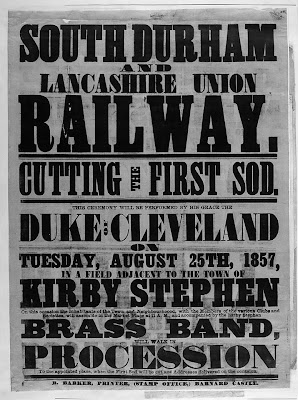 Ann Sandell sent this me this facsimile of a poster recently. It is  a copy of the announcement of the ceremony for the 'cutting of the first sod' - an event which took place at the site of what is now Kirkby Stephen East station on Tuesday August 25th 1857.

On that day, and led by the Kirkby Stephen Brass Band, the assembled dignitaries, the directors of the Stockton and Darlington and South Durham and Lancashire Union Railway, and townsfolk met in the Market Place at 11:00 AM and processed to was then just a field well to the south of the town. Henry Vane, the Second Duke of Cleveland made the trip over from Raby Castle to perform the ceremony of cutting the first sod. I wonder if he was dressed in the finery of his uniform as a General of the British Army. No doubt, in best Victorian tradition, there were many and long speeches made.

The Duke of Cleveland was a recent convert to the profitable cause of railway development. He had given the directors of the Darlington and Barnard Castle Railway a very hard time during the preparatory work for building that line. On one occasion his gamekeepers had caught the railway's surveyors trespassing on his estates disguised as miners. The engineer, Thomas Bouch, was summoned to Raby Castle to apologise and explain himself and must have been quaking in his shoes. But it seems that Henry Vane took a liking to the young engineer and later became closely involved in the Stainmore railway project.
Posted by Iain Robinson at 02:41