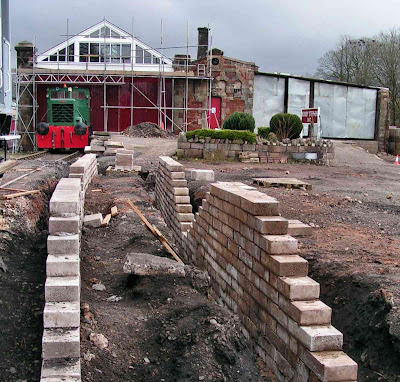 During March a new platform extension has been taking shape on site at Kirkby Stephen East station. The work was one of the improvements requested by Her Majesty's Railway Inspectorate and needed to be carried out before we begin to operate trains for the public in August.

The work will extend the former eastbound  'Darlington Platform' of the station by 155' (50m) which will mean that we can draw up two coach trains outside the train shed that we are currently using to display two of our Gresley coaches and the 0-4-0 Peckett 'saddle tank' locomotive 'F.C. Tingey'.

Last weekend work on the retaining walls of the platforms was well advanced and the new walls are beginning to make an impressive site as they curve away to the west.

The work is being funded thanks to the generous assistance of four grants which the Stainmore Railway Company received last summer. You can find more details about the the project here 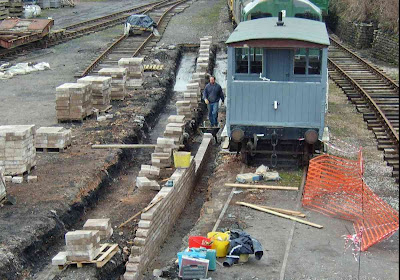 Email ThisBlogThis!Share to TwitterShare to FacebookShare to Pinterest
Labels: WORK IN PROGRESS