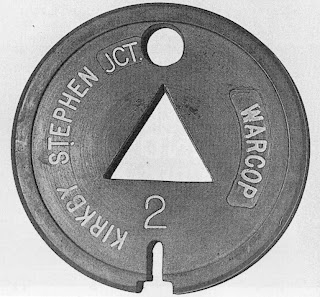 I wonder if amongst the local memorabilia that still survives from the Stainmore Line there are any more of these around - and if so if they will turn up at our exhibition of memorabilia at the 'Stainmore 150' event at Kirkby Stephen East  from 27-29 August.

Railwaymen knew these heavy metal discs as 'tablets' and in signal boxes they were locked into a machine known as the "Tyler Patent Tablet Apparatus". They were the critical link in a safety system to ensure that two trains couldn't collide head on when using a length of single track between stations. The system worked by having a tablet  machine in the signal boxes at each end of a section of track - in this case between Kirkby Stephen and Warcop. You could only ever have one tablet out of the pair of machines at any time. The driver carried it with him in the cab of the locomotive and it was his guarantee that he wouldn't meet a train coming the other way, a disaster known to American railwaymen as a 'cornfield meet'!

'Tablets' were handed between signalman and driver in a black leather pouch attached to a white hoop, and you often see these in collections of memorabilia too. There was quite a knack to hook it over the arm of a driver high up on the footplate of a passing locomotive at night, and if you missed and he dropped it there would be a great deal of cussing from the footplate as the brakes were slammed on and the fireman had to clamber down and retrieve the dropped item from the trackside. But there was no question of carrying on without that all important tablet in the cab.

Do you have a tablet from any of the sections of the single lines on which they were used around Kirkby Stephen, or east of 'Barney'? If so we would love to hear from you.
Posted by Iain Robinson at 01:25

Email ThisBlogThis!Share to TwitterShare to FacebookShare to Pinterest
Labels: MEMORABILIA