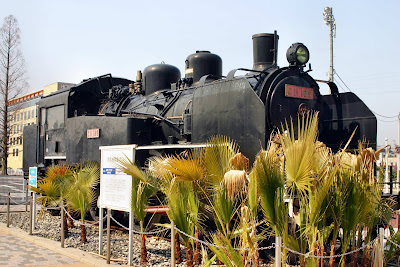 Here is a photo that I took on Monday in the car park of the Aeon Shopping Mall in Hiroshima. That locomotive gently rusting away behind the palm trees is a Japan National Railways Class C11 2-6-4T. There were 381 of these engines were built between 1932 and 1947, and the last was withdrawn from service in 1975. They are the equivalents of our own British Railways Class 4MT 2-6-4 tank locomotives and their Fowler and Fairburn predecessors, and they performed much the same work hauling suburban and rural passenger trains.

A pity that it is the wrong gauge for our track at Kirkby Stephen East! In Japanese public parks and town squares there are more than 400 steam locomotives like this rusting away in the sunshine, presented forty or fifty years ago by JNR management to local authorities as monuments to steam. That is the equivalent of three 'Woodhams'! - the  famous scrapyard at Barry Island from where many of the locomotives restored and working on Britain's 'Heritage Railways' were 'rescued'.

You might think this has little to do with our Stainmore project. But here is the difference. In Japan   the surviving steam heritage is still owned and run by the national railway system, there is very little tradition of private conservation and restoration by volunteers. Sadly all these locomotives like 'C11 189' here will never be rescued and steam once again. They will still be rusting on the same plinths a hundred years from now.

In Britain, starting back in the 1950's with projects like the Talyllyn, the Ffestiniog and the Bluebell Railways and then the North Yorkshire Moors and the Keigthley and Worth Valley, there began a long and very successful tradition of the voluntary restoration and development of 'Heritage Railways' that is unmatched anywhere else in the world. Our Stainmore Railway Company has now also become a part of this proud tradition. But it can only flourish if we put down strong roots and attract enthusiastic -and perhaps especially young supporters that will continue to take responsibility for 'making things happen'. Now that we are beginning operations as a working railway we will need the active support of many, many more volunteers.
Posted by Iain Robinson at 04:19

Email ThisBlogThis!Share to TwitterShare to FacebookShare to Pinterest
Labels: VOLUNTEERING