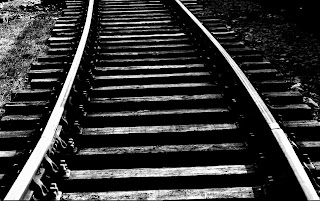 Some jobs you go through life thinking "I wish that I had done that!". In my generation of course it generally used to be "engine driver" and some of us eventually made it too on Britain's 'Heritage Railways'.

But there was one job which as a youngster I wanted to do when I grew up because I knew and admired the gentleman who did it. Well, I never knew his real  name but his nickname on the railway was 'Nelson' and he lived in Bowes. Why 'Nelson' I don't know - perhaps he was in the navy during the War. I wonder if any of his family still live in the area?

Nelson worked as the 'trackwalker' for the Stainmore summit 'length. Every morning he would collect his light sledgehammer and catch the 07:14 train from Bowes arriving at Barras at 7:30. Then with his hammer over his shoulder he would walk the 10 miles 22 chains back to Bowes.

Of course for him it wasn't just the ten miles. His job was to check the track and knock back in all the loose oak  'keys' that held the bull head rail in the cast steel chairs. With the big ranges of temperature in the course of a day and the battering that they took from 21 ton mineral hopper wagons they were forever working loose. He needed to criss-cross the pair of tracks to check outside both the outer rails which must have lengthened his daily walk by half. Fifteen miles carrying a sledge hammer. Snow, rain, wind, shine. Every working day.

I used to chat to him when he came up into the Stainmore Summit box for his 'bait' by the stove around 11:30. He would thaw out and talk for half an hour as he ate his sandwiches and drank a pint mug of tea and then head off east down the bank towards Bowes again.

After one freezing snowy December morning walk up the track from Barras to Bleathgill with a crescent moon setting over the Vale of Eden and the early pink dawn light reflecting off the snow covered fields he confided in me that it was so beautiful and still that he thought for a minute that he must have died and gone to Heaven.
Posted by Iain Robinson at 00:30

Email ThisBlogThis!Share to TwitterShare to FacebookShare to Pinterest
Labels: EMPLOYEES