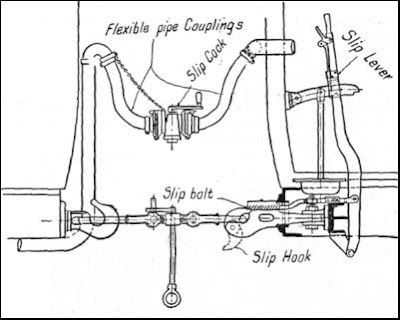 The Stainmore line was always difficult to work, and especially with the complexities that resulted from the use of 'pilot' locomotives in front of the train engine and 'bankers' to push at the rear of the train to cope with the gradients. Some time around 1953-54 someone decided that it might be a good idea to try using a 'slip coupling' to avoid the weekly summer 'Blackpool Specials' stopping at Stainmore summit to uncouple banking engines from the back of the train.

'Slip couplings' basically worked by pulling on a steel cable which ran along the locomotive and down to the front buffer beam. This lifted the coupling on the front of the rear engine which was then uncoupled from the train and could apply brakes and drop back as the rest of the train accelerated  away downhill.

Certainly the Saturday morning when this was first tried my grandfather took me to 'Barney' station to watch the 4MT at the rear coupling up with much whistling and steam emerging from cylinder drain cocks and the steel wire was rigged to affect the disconnection 20 minutes later when the train reached Stainmore summit.

Whether that engine and train parted as planned I don't know. I still have visions or the rear locomotive stuck on the end of the train and headed down the bank for Kirkby Stephen because the technology didn't work out as planned. But certainly it never caught on much - in fact that trip is the only time I personally recall seeing a 'banker' equipped in such a way
Posted by Iain Robinson at 06:42