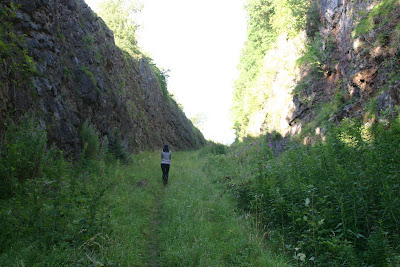 I think most people living in the Kirkby Stephen area have taken a walk up the course of the old line from Stenkrith towards Podgill and Merrygill. Many often walk the 'circuit' from town, heading up the Eden and then back via Hartley village. But far fewer have followed the old track bed further up the bank from Hartley. You can gain access to it from the centre of the village climbing up through a steep field, and then follow the course of the line north through the John Strutt Nature Reserve. It climbs around the hillside and you can follow it for more than two miles to Rookby Scarth. As you get higher above the Vale of Eden there are some beautiful views north and west, and you can return through Winton if you want.

The last half mile runs through a large cutting which was always known to Railwaymen as 'Big Hill Cut'. It is on a curve and very deep - I would guess at least 60' (20m.) or maybe more. This place had a terrible reputation for getting snowbound when the line was working, in winter stranded trains could completely disappear under the deep drifts. Amazing to think that all this rock and soil was moved mainly my men with shovels.

Big Hill 'Cut' must have been even more impressive when it was first made because it was dug out for only a single line and so would have been about 12' wide at the bottom, almost like a knife cut through the hill. It was eventually widened in the 1890's and a second track was laid.

Well worth a visit, but watch out for your ankles! The rabbits have been at work in all that gravel and sand left over from the ballasting of the line.
Posted by Iain Robinson at 09:38