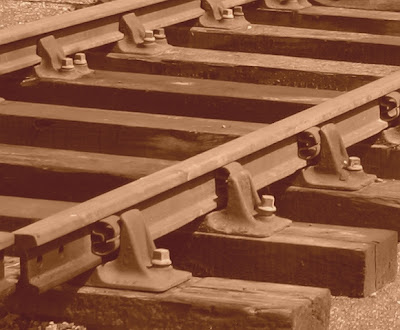 When you come to reconstructing a railway in the way that we are doing at Kirkby Stephen East there are always going to be some small details that - no matter how hard you try to create a faithful facsimile of the original - are going to be a little different. And here is one I sometimes notice prowling around the site.

Bullhead track was universally used on the Stainmore line. In this design of permanent way the rail sits in cast steel (once cast iron) 'chairs' which are bolted to the wooden sleepers and the rail is held in place by either oak or metal 'keys'.

This track in the West Yard at Kirkby Stephen East is a pretty good facsimile of the original - but each of those steel chairs had an owner and date cast into the top surface. On Stainmore there were some new replacement chairs from British Rail days but most were stamped 'LNER' and dated from the 1920's and 1930's when a lot of the late Victorian track had been replaced.

The really interesting place to go 'chair spotting' though was in the sidings. There you could find North Eastern Railway chairs dating from the 1880's and 1890's when much of the permanent way had been upgraded to take the heavier axle loads of the late Victorian era. So even just by checking the dates of the track components you could learn a lot about the evolution of the railway.

Sadly all that 'archaeological' evidence vanished when the track was 'lifted' in 1962. However accurately we can re-create the appearance of the track now we can't re-create its history.
Posted by Iain Robinson at 00:05