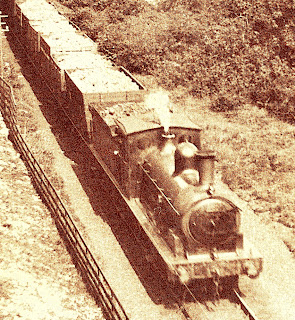 Considering the severity of the gradients on both sides of Stainmore it is surprising that there weren't many more 'runaways' over the years with serious consequences. Just how many actually happened would make an interesting topic for research using the surviving signal box 'Occurrence Books'.

My granddad told me of one that he was once involved with, I would guess some time towards the end of World War II. He was working in 'Barney' West Box and one morning was letting the local goods 'pick-up' train out of the yard on a trip up to Hulands Quarry and Bowes. Once it was clear of the crossover on Percy Beck viaduct he 'pulled off' his home signal for an approaching trainload of mineral 'empties' bound for West Auckland. As luck would have it he noticed that the track circuit on the diagram above the lever frame suddenly showed 'line occupied' just a few seconds after he had cleared the signal - much too soon for a locomotive to be passing if the driver had been observing the signal at danger.

He got on the phone to the signalman in the East Box immediately and said "Get your gates open! We might have a runaway here!" And sure enough a few seconds later the J21 and trainload of empty wagons sped by - with nobody on the footplate! Like the 'Marie Celeste'!

The signalman on duty at the East Box legged it after that train as it started up the bank towards West Auckland. But running out of steam and facing a steep hill it soon slowed to a stop and he got onto the footplate, closed the regulator and got the tender handbrake on while the guard got some wagon brakes pinned down. He later had a letter from the 'management' grudgingly thanking him for his prompt action but pointing out that if he had been injured he wouldn't have been insured!

Some time later the driver and fireman showed up at Bowes signal box. Their 'story' - which they stuck to like glue - was that they had both been 'taken short' and suffered simultaneously from a severe bout of diarrhoea. And so they got away with it. But the general view around 'Barney' station at the time was that the pair of of them had either decided to try their hand at fishing in the Greta for a while or perhaps set a few snares to check out later and hadn't got the locomotive brakes properly secured or the regulator fully closed and the train had got away form them. One can only imagine their faces when that 0-6-0 started to roll and head off eastwards at speed.

We will never know the truth.
Posted by Iain Robinson at 00:38

Email ThisBlogThis!Share to TwitterShare to FacebookShare to Pinterest
Labels: STORIES