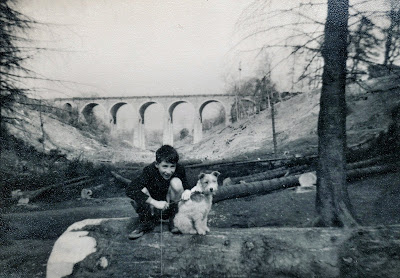 I know that we have some readers from Barnard Castle here on the '150' Diary and I include this photograph of a long lost view with them in mind. Can you guess where and when it was taken?

Well, the location is 'Barney Woods' and it was taken at the bottom of the descent on the footpath down from the station end, just where it meets up with the path from the golf course and crosses the first small wooden footbridge on the way down to the Tees. In the background is Percy Beck Viaduct . If you look carefully just above the first arch on the right you can see the high post of the West Box home signal gantry - a terrifying climb for changing an extinguished signal lamp of a dark winter night with a gale blowing! A little further to the right is the rear wall of the West Box itself.

Yes, the photograph is of your's truly and my guess is that this is Spring 1958. Around that time the pine plantation at the top of this valley was clear-felled right down from beyond the viaduct to this point, where there was once a grove of very beautiful pine trees. Back then you could play in the crystal clear beck here. I'm not sure if that is still possible with the effluent that once flowed here from the 'Glaxo' plant although I would guess under current environmental laws pollution is now strictly controlled.

The dog was my grandmother's. She was called 'Shiela'. Actually even wire-haired fox terriers are a bit of a museum piece now, I can't remember the last time I saw one.

It would be interesting to know the whole history of the clearance and replanting of 'Barney Woods'. Back in the late 1950's clear felling reached this point and then stopped - I heard a rumour that it was because the owner had died. But then around 1961 cutting was resumed and the woods were clear felled right down to the Tees. Extraordinary to think that so recently so much amenity ancient oak woodland cut just be cut. So the current new planted woodland here is about fifty years old now. It has aged along with me.

Now that the trees have matured once more this view of Percy Beck Viaduct has vanished again. I wonder if it will still be there when the trees are harvested in about another century?
Posted by Iain Robinson at 02:25