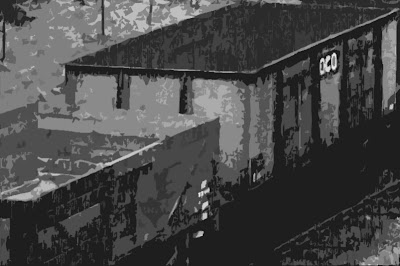 Does anyone remember those years after the closure of the railway between Kirkby Stephen East and Tebay when the line was used as a store for mineral and freight wagons?  I don't know what the history of it was but certainly from around the Spring of 1962 the route was used to store large quantities of unwanted stock. I guess that it was because as a part of the modernisation programme at the time wagons with short wheelbases or without continuous brakes was simply no longer required. On a modern railway trains needed to move at higher speeds than was safe with old designs of rolling stock, and you needed to be able to apply brakes along the whole length of the train.

Whatever the reason within a few weeks of closure wagons started to appear on the line coupled into long 'blocks' and parked up awaiting the scrapper's torch. In those days the A685 followed a more northerly course higher up the hill and if you looked across the valley of the upper Lune you could see thousands of hopper wagons rusting away. Presumably they were brought in from the Tebay end. At places like Gaisgill where there were level crossing gates, there was a gap left with the wagons stopping and starting on each side of the road.

How long these unwanted trains remained before they were eventually cut up and the track was removed I don't know. But I am sure that they must have been there a couple of years. Estimating at around 250 to the mile there must have been around 3,000 to 4,000 of them.

At the time we all thought that they were very unsightly and a blot on the landscape, but now how we would appreciate the chance to run a camera and tape measure over them now! Or even better invest in a dozen so that we could marshal a 1950's mineral train once more in the yard at Kirkby Stephen East. How true it is that "you don't know what you have got 'till it's gone ..."
Posted by Iain Robinson at 23:18