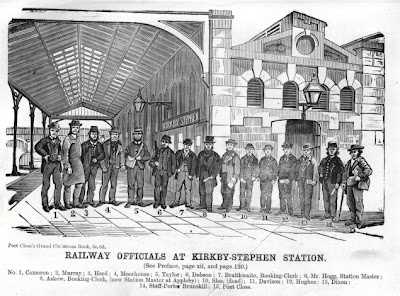 Yesterday I was writing about 'Barney' station in the early 1860's and then this morning Ann Sandell sent me a copy of this wonderful engraving of Kirkby Stephem East Station in 1871- although at that time of course it was the ONLY Kirkby Stephen Station. The illustration is from a copy of John ('Poet') Close's "Grand Christmas Book" for 1871 and both shows and names the station staff of the time. Ann has researched each of the people in the picture using the 1871 Census and other sources and you can find out much more about the station staff of the time here.

The backgrounds of these early Kirkby Stephen railway staff are very interesting but my eye was also drawn into the detail shown of the station building. The quality of draughtsmanship illustrating the surviving west wall and a comparison of the underside of the Darlington trainshed roof with architect's plans in Peter Walton's book suggests that the station was faithfully recorded here at the time, and so we can see the position of many details including some of the original  (paraffin?) lighting and notice boards

Looking at the people I found myself wondering if this was some kind of early photogravure process. It is certainly possible because dry plate photography had become widespread a couple of years earlier and many photographs of S&D locomotives and scenes survive from the period. But I guess it is straightforward engraving onto copper with a burin in which case of course the artist was working on a mirror image of the final printed illustration. I once watched an engraver at Bartholemew's in Edinburgh adding the M6 over Shap to the half-inch map using this incredibly skilled technique, engraving place names by hand backwards in italics!

One interesting thing about the picture is that people get noticeably smaller from right to left! Is this because the artist realised that he if he continued drawing his figures at the same size he would only have room for thirteen?
Posted by Iain Robinson at 01:00