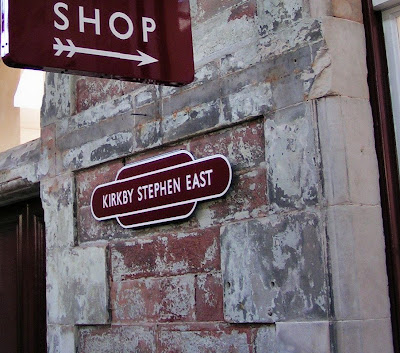 One of the issues that we face with the restoration of  Kirkby Stephen East is the removal of the white paint that has been applied to the stonework inside the building. It must have been done during the years that it was being used as a factory, presumably to make the space a bit lighter once the two ends of the trainshed had been sealed off with new partition walls.

Of course in those days the long term future of the building was something that nobody was even thinking about. But taking paint off stonework is a darn site harder - and more expensive! - than putting it on. Especially inside where it will never 'weather'. Painting onto stone is one of the worst things that you can do from the perspective of looking after an historic building. At least after twenty or thirty years it is now flaking a bit, and has developed a kind of 'historical' patina of its own. But soon we are going to have to find the funding to restore the range of buildings to their former and proper glory.

Where did the stone used to build the station come from? Perhaps there is someone that can tell us. It is a red Permian era sandstone but whether it is 'St. Bees Sandstone or 'Penrith Sandstone' I can't tell. There are quarries today further down he Eden Valley that produce similar material but this rock outcrops under parts of the town too - in fact this is the most southerly place it can be found in the district where it outcrops just above the brockram.

My personal guess is that it is local and that there was a quarry 150 years ago, perhaps somewhere to the west of South Road or the High Street. It is exactly the same stone as has been used for the Temperance Hall facade built in 1857 at almost exactly the same time as the station - perhaps the masons moved straight on from one job to the other.

Has anyone any information of guesses?
Posted by Iain Robinson at 03:34