Ride on a 'Wickham' trolley 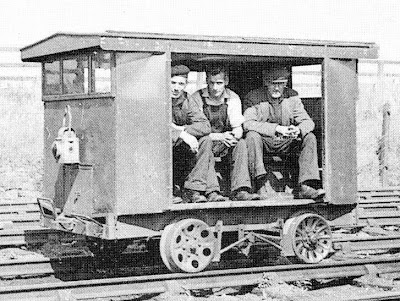 Although a lot of material around the 'Stainmore 150' celebrations is likely to focus on memories of the Kirkby Stephen end of the line, this year's events are concerned with remembering the whole route. We shouldn't overlook connections between the railway and other towns and villages. 'Barney' had a large railway community in the town, West Auckland and Darlington sheds had many staff who worked most of their lives out on the line, and there were employees scattered in many communities along the route.

Here is a picture that I took at Bowes in 1959 of the local 'PW' ('permanent way') gang on their 'Wickham' trolley. I remember the day well because it was just before they gave me an illicit ride up to Stainmore Summit on their 'trusty steed' as they made a trip to check out some problems with the track drainage. It was a noisy and draughty trip 'up the bank', but coming back was a 'whizz' -  they didn't use the engine at all. Just 'rowed off' with their boots and settled back as that trolley rocketed silently downhill under the force of gravity. Scary stuff!

Do any of the people on this trolley still live in the Bowes area I wonder? If they do, then they must be in their 'seventies' or 'eighties' I guess ... If you do then I hope you will be coming along to the ex-employees reunion on 29 August at Kirkby Stephen east!
Posted by Iain Robinson at 01:30

Email ThisBlogThis!Share to TwitterShare to FacebookShare to Pinterest
Labels: EMPLOYEES