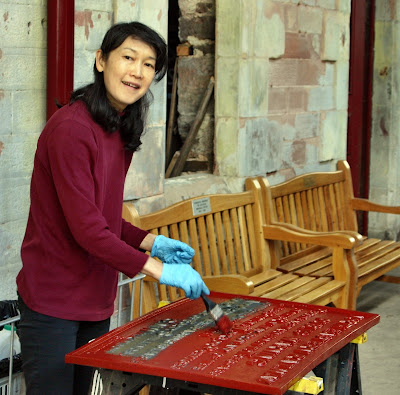 Just eight weeks to go until the 'big weekend' in August and there was plenty of paint being slapped around up at Kirkby Stephen East today. A team was outside priming the 'Tebay Platform' shed doors and inside several paint jobs were also in progress.

Here is Edera priming two new replica cast iron 'No Trespassing' signs. They are EXACTLY the ones that I remember over the Stainmore Line - signed by 'C.N. Wilkinson'. Not sure when he was the Company Secretary but it must have been early in the 1900's because the penalty for trespass was already 'forty shillings'. Cheap by today's standards eh? I think the going rate now is £1200.

Somewhere I have an excellent photograph of such a sign by the stile at the east end of Tees Valley Viaduct taken with my first Brownie 127 camera in 1958. In the background is a stripy blur which I can tell you is the pilot BR 4MT on a 'Blackpool Special' legging it out of Barney for the foot of the bank. This was the first time I learned about the issue of shutter speeds. Nice picture of the 'No Trespassing' sign though!

Anyway the point I wanted to make was - if you are a 'dab hand' at painting or any similar tasks this could be a good time to turn up at the East Station as a volunteer ...
Posted by Iain Robinson at 23:24