Pay attention in the pram at the back there! 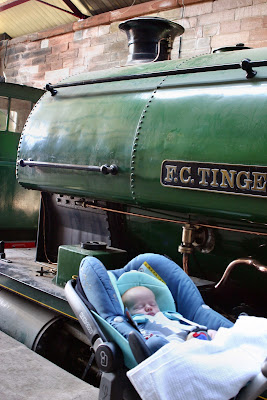 Meet the Stainmore Railway Company's youngest shareholder, my grandson Thomas Halstead. He was only born three weeks ago but already he has a £10 stake in operations at Kirkby Stephen East. In fact he had it on the day he was born.

You know what Francis Xavier used to say "Give me a child until he is seven and I will give you the man ...". Must make a note to get him here as often as possible over the coming few years so that he has a chance to grow up with the sound of safety valves 'popping' in his ears just like his grandfather. My first memory of steam locomotives even in my pram is certainly as being noisy beasts. When I was a small child we lived in a Nissen hut on Croft Aerodrome south of Darlington and my first dim memories are of (BR experimental blue!) Gresley Pacifics racing by. Who could ask for better first memories than that?

Young Tom is going to have to shape up though - no point in sleeping on when there is train spotting to be done.

And if you have a new child or grandchild in the family too - why not buy them a share in the Stainmore Railway Company and pass our heritage on bit by bit to a new generation?
Posted by Iain Robinson at 18:11