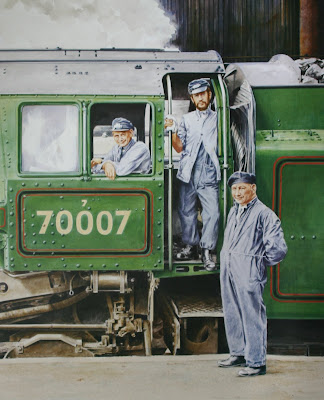 Few things are certain in life but I guess one of them is probably that BR 'Britannia' Class 70007 'Coeur-de-Lion' never hauled a 'Blackpool Special' over Stainmore. It isn't beyond the bounds of theoretical  possibility that one of the Class might have found itself running into 'Barney' station on a troop 'special' from Darlington or even possibly 'around the block' from West Auckland on a 'running in' turn after attention at Darlington Works. But such large and heavy engines were absolutely verboten over the wrought iron viaducts of the Stainmore Line.

To be honest I'm not even sure where 70007's 'native turf' was. I am no expert on 'Britannias' and my only reference book is on a bookshelf 7,000 miles away. But I think she was an Eastern Region engine. Can any of our readers tell us?

Anyway the reason I am posting today's image is that it is one of the beautiful paintings by John Robinson that we are currently stocking in the shop at Kirkby Stephen East. I just love the late 1950's atmosphere of this work and the portraits of the footplate staff.

But if you want a copy, don't delay. There are only a limited number of this picture available in our stock , and we are expecting it to be popular. Drop in at the station soon!
Posted by Iain Robinson at 22:41