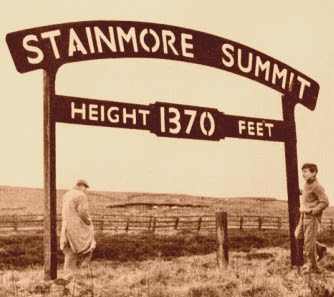 I heard an interesting bit of news today. The appeal for the replica 'Stainmore Summit' sign is going well and we are on target to have raised sufficient funds to erect the sign during August.

But Mike tells me that one of the cheques that arrived today particularly delighted them both It arrived on their door mat all the way from New Zealand.

The contributor was Charlie Oxley, a former shedmaster at Kirkby Stephen who will be known to many of the ex-employees who read this blog and who will be around at Kirkby Stephen East on 29th August. Charlie is now 83 years old and lives in Taranaki which if I remember right is on the east side of North Island somewhere north of Wellington.

Charlie was shedmaster at Kirkby Stephen shed from 1956 to 1957.

Amazing to think that half a century later and half way around the world the old line should still remain so vividly in some one's memory. But it doesn't surprise me at all. Charlie says that he is beyond making the trip back to the UK now to attend the reunion in August but he is delighted that the sign is going back up at the summit again.
Posted by Iain Robinson at 21:15