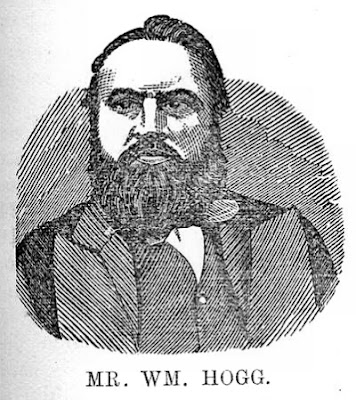 To take a break from more serious work that I OUGHT to have done last night I squandered an hour on my 'Family Tree' web site trying to patch together  more detail about William our first stationmaster at Kirkby Stephen East. He worked here from 1861 through into the 1890's after which he vanishes from the local record . He must be one of the several 'William Hoggs' that died elsewhere in the UK during the following decade and a diligent search should turn him up soon.

His father Thomas was born at Gainford in 1782 and his mother, Ellen was born in Great Ayton in 1803. They had at least seven children and William, born in 1834, was the fifth.

But here is the interesting thing. Thomas must have been married before, he had a son Joseph born in 1818. And in the 1851 Census William Hogg was working as a porter working for the Stockton and Darlington Railway, employed at Redcar station where his older half-brother was  stationmaster. So it was family connections that eventually brought him to the top Kirkby Stephen job. Later, when he was 23 he was working as a guard on the newly built Darlington and Barnard Castle line and there, somehow he met his wife Sarah Annie and their marriage was registered between April and June 1857.

So there are some bare bones of a biography. Often you can get no more. But at Kirkby Stephen East, thanks to 'Poet' John Close, we at least know what kind of a man he was and what he looked like later in life.
Posted by Iain Robinson at 21:24