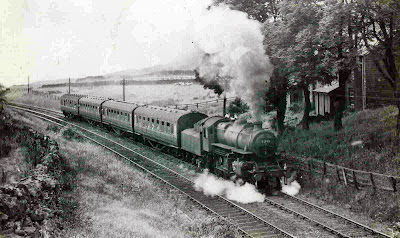 I came across this interesting picture in a collection that I was given last week, and I wonder how many Stainmore line aficionados know where it is? I think that this is the only photo that I have ever seen of the location. Ivatt 4MT 43102 is working hard up the bank even with such a light load and that should offer a clue. But actually now almost everything in this photograph has vanished.

The road along the hillside in the background is the real clue. These are the 'summit cottages' - a row of (I think) four terraced houses a few hundred yards west of the summit box and close to where the road to Barras used to leave the old A66. Often in photographs of the summit box you can see that group of trees behind the accommodation bridge in the background. The cottages went a couple of years before the end of the line, maybe in 1959.

I can only remember the cottages when they were derelict. Signalmen going on duty would park up in the cinder lane in front of the houses and climb over the fence just behind the locomotive here and walk up the line to the right to get to work. Once slithering down that lane in winter we went nose first into a couple of feet of snow in his 'mini' HEC159 going on 'early turn' but my grandfather always kept a shovel in the car to deal with that kind of thing.

Now the summit cottage site is under the westbound carriageway of the A66.
Posted by Iain Robinson at 22:47