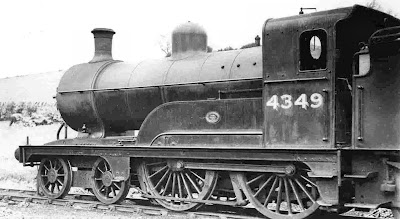 Here is a neat picture I came across in a collection Mark let me have recently - a Great Northern Railway 'Ivatt' D3 4-4-0. The picture was taken by H.C. Casserley, I think on the coaling track at Kirkby Stephen shed. It must be between 1933 and 1935 which was when '4349' was based at Kirkby Stephen.

The D3's cam north in 1931 and were originally based at Darlington for trains to 'Barney', Saltburn and Bishop Auckland. But two years later they found their way 'over the top' and they were not popular. Not only were they designed for the flat lands of Lincolnshire and Cambridgeshire but they had spartan cabs too. As you can see complaints by footplate crews led to the fitting of a cab extension with a single window but they certainly weren't as 'roomy' as Worsdell cabs. Those 6'8" 'drivers' were probably dodgy on greasy rails too. Pretty little engines though.

Anyway they were gone by 1935. As luck would have it when they closed the Redhills direct link between the Eden Valley and Cockermouth lines the engines were too big for the turntable at Penrith.

If you look just above the front buffer you can see a railwayman working on his allotment on the embankment side.
Posted by Iain Robinson at 21:09