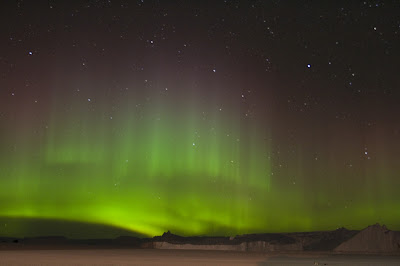 One aspect of working as a signalman over Stainmore which is probably now almost forgotten was the effect that the aurora borealis could have on the block and telephone circuits between signal boxes. This could occasionally be a problem anywhere in northern Britain but especially on upland lines. In those years of heavy sunspot and geomagnetic activity when an aurora appeared in the northern night sky these magnetic storms could play havoc with those long strands of copper wire stretched from pole to pole across high lonely moorlands.

I remember seeing this happen at the summit box once in the autumn of 1958. It had been dark a couple of hours and we were waiting for the last DMU from Penrith back to Darlington when all the bell circuits and phones started to jangle and the 'train on line' needle began to twitch. But the ringing was erratic and variable, when the train eventually came it was easy to notice the firm 'real' ring from the block telegraph instrument at Belah. I was told that 1947 had been a very bad year for it.

Even confident in the knowledge of the cause it was darn spooky I can tell you.  I wouldn't have fancied working a night shift alone at one of the lonelier boxes with the instruments ringing and dancing through the cold 'wee hours' and the fingers of the aurora creeping up the northern sky!
Posted by Iain Robinson at 20:55