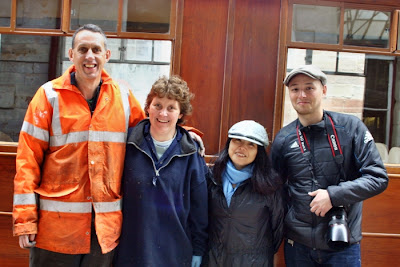 A feline 'interview' on the agenda at Kirkby Stephen East today - a reporter and photographer arrived from Japan to meet our station cat 'Quaker'. Rieko Ishii is a journalist with a Japanese cat magazine and is currently putting together a book on English 'Railway Cats' and 'Quaker' was second on her list this trip. But the feline that she was expecting to meet at Scarborough yesterday failed to show and so Kirkby Stephen turned out to be the first successful photo-shoot in an itinerary that will take then as far south as Devon.

'Quaker' turned up for her first appointment and we got a few photographs but then she got a bit concerned about Rieko's swizzly stick and catnip and disappeared behind the 'Peckett' where photographer Tom Coulton managed to follow her and get some more images. Later she regained her 'cool' and came through the 'motion' onto the footplate to settle down next to Mike, and Tom managed to get some really lovely portraits.

Now we'll have to await the book - in Japanese of course so I'm not sure if we will be stocking copies in the station shop. But of any 'Quaker' aficionados would like a copy let me know and I'll order you one from Tokyo.

The picture shows Rieko and Tom at Kirkby Stephen East with Sue and Mike.
Posted by Iain Robinson at 20:56