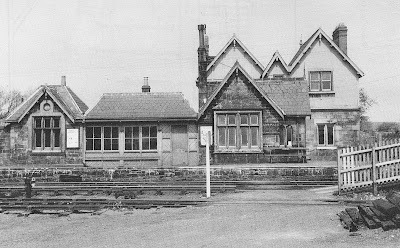 Apart from the main junctions I always used to think that Bowes was by far the most interesting station on the Stainmore line. I often used to spend time there and I will probably write about the place several times here over the next few months. It makes me sad to see the ruin of it all now as I turn off the A66 towards 'Barney' but  at least the old SDLUR goods shed still seems to be faring well.

But what I wanted to talk about today was the 'Bowes Level'. Many aficionados of the Stainmore Line seem to think that the climb to the summit was unremitting but that was far from the case. Through Bowes station there was nearly a mile of almost level track.

Climbing up from Tees Valley the ruling gradient was about 1 in 69 but that stopped at the farm accommodation bridge just east of Bowes station where the gradient - though not actually completely level - eased right down to 1 in 3,900. It picked up again just at the skew bridge over the A66 at the west end of Bowes village to 1 in 154 and then a steep 1 in 62 again by Spital.

From the signal box or station platform this 'roller coaster' was clearly visible. Eastwards it almost looked like the line was dropping off a cliff while westwards it climbed away towards the sky. But I have never seen a photograph that captured this sight. Of course the irony was that in railway terms 'Up' was down while 'Down' was very much up.

Drivers of westbound mineral trains made good use of the 'Bowes Level'. The train engine and 'bankers' would burst under that eastern farm accommodation bridge struggling against the bank and then really get shifting through the station in the hope of building up a good head of speed and momentum before they had to put their shoulders into the bank again. I wish that I'd taken some 8mm cine film of it!
Posted by Iain Robinson at 21:05