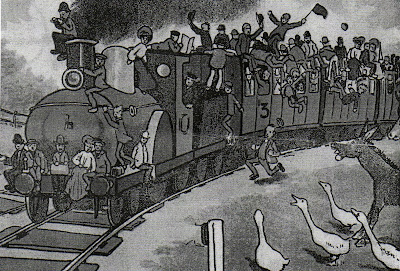 This example of an Edwardian 'Valentine' card (the publisher, not the saint) arrived in my e-mail today from Ann Sandell. It is entitled 'Tebay to Kirkby Stephen Express' but to be honest it doesn't bear TOO close a resemblance to any North Eastern Railway locomotives that I am familiar with! After several pints it might just about pass as a Class 'R' 4-4-0 but maybe I'm taking it all too literally eh? It is a fault of mine.

I like to think that every train to depart our spanking new platform at Kirkby Stephen East in future is going to have a similar carnival air to this. Perhaps we can't literally have cheerful young men in straw 'boaters' perched on the saddle tank of 'F.C.Tingey' nor young couples canoodling  on the front buffer beam. Can't see it going down well with the 'Health and Safety'. I'm thinking of something a tad more symbolic here, even allegorical. When our passengers climb aboard a Stainmore Railway Company train we want the sun to put his hat on and come out and shine! This is how we want them all to FEEL!

Did young testosterone-fuelled twenty-somethings really put on their best suits and blouses in these long vanished 'Harry went to Harrogate' years and head off for a once a year exciting day out in Tebay courtesy of the North Eastern Railway Excursion Department? Dunno. Probably though.

I like the geese too.
Posted by Iain Robinson at 20:04