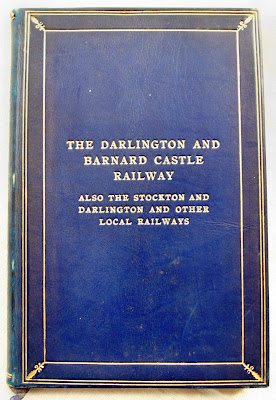 After a long time looking I managed to locate a book this week that has been on my 'little list' for years. "The Darlington and Barnard Castle Railway" was published in 1877 and was described at the time as being written by "An Inhabitant of Barnard Castle". But my copy was part of a small private reprint made in 1925 by Mr. R.T. Richardson of Barnard Castle to coincide with the railway 'Centenary Celebrations'. He records that the original book was actually written by his father Mr. Thompson Richardson who was one of the joint solicitors during the construction of the railway.

The antiquarian bookseller that I bought this volume from believes that the main part of the book has been bound up from original pages printed in 1877 with a new preface set in 1925. In any case in must have been a small print run as a note makes it clear that copies were distributed free to local friends and dignitaries.

If you are looking for details of S&D locomotive and stock rosters and the like from the 1850's I'm afraid that this is not the book for you. It concentrates on the various efforts made to get a Parliamentary Bill to build the line and especially the thorny relationship between the railway promoters and the Duke of Cleveland who was none too keen to have a railway across the estate of Raby Castle. This is the same Duke of Cleveland of course that only five years later was wielding the spade at the 'first sod' ceremony at Kirkby Stephen. But as a first hand from the horse's mouth account of the problems of railway promotion and construction it is absolutely gripping and probably rather relevant to the immediate future of the Stainmore Railway Company too.
Posted by Iain Robinson at 22:13