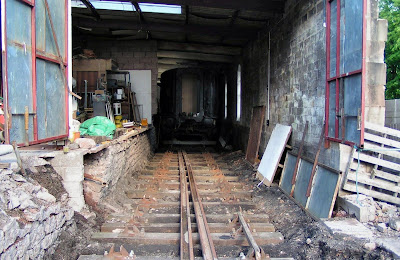 Here is a view that has long been hidden - the 'Tebay Platform' well has been re-excavated over the past couple of weeks and now a breeze block partition wall has been knocked through to give clear passage from end to end inside. In the distance you can see the Gresley coach stored in the workshop - an area of the building not normally open to visitors. In the foreground the sleepers have been laid and two rails manhandled into position so that the new track panel can be completed. Kirkby Stephen East is a two platform station once again, although it will be some time before this side of the building is restored to its former glory.

The Tebay trainshed roof was removed in the early 1950's leaving just the outer retaining wall on the right here. When the building was sold off as a bobbin factory the wall was lowered a few feet and also shortened by one bay at the far end and a new lean-to roof added - the one which survives here.

Great to see this part of the station building reconnected to the rest of the world once more!
Posted by Iain Robinson at 21:37