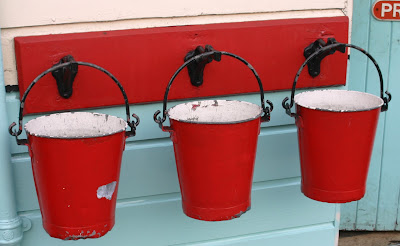 I used to know someone whose response to any request for help  that was even moderately troublesome was "Bring me a bucket of sand and I'll sing you the 'Desert Song'". Well, here we are - some buckets of sand!

I don't know when these fire buckets became standard equipment on stations. Were they simply a legacy of World War II air raid precautions, or did they go back much earlier to pre-grouping days? But I guess if we want to have Kirkby Stephen East restored as a 1950's Heritage Site it is a detail we need to check out. These triplets were photographed last summer at Grosmont on the North Yorkshire Moors Railway.
Posted by Iain Robinson at 00:45