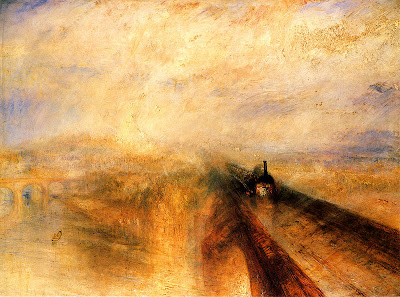 Remember the famous painting 'Rain, Steam and Speed' by William Turner? It was painted in 1844 and shows a westbound Brunel broad gauge train crossing the Thames at Maidenhead. It always catches my eye because we don't normally associate the 1840's with going fast by any means of locomotion. And yet just twenty years after the opening of the Stockton and Darlington Railway passenger trains were already bucketing along at 40-50 mph.

I remembered this picture the other day when I was flicking through Ken Hoole's book on the Stainmore Line. It was published by Dalesman in 1973 and I can't understand why it has never been reprinted - it would certainly sell well in our shop at Kirkby Stephen East. Back then I bought my copy in the newsagents in town for 90p. Now I see there are four second-hand copies on Amazon ranging fro £15 to £38.

Talking of the first passenger train services from Darlington to Tebay in 1861 the author remarks that the fastest - the 3:00PM - took just two hours and five minutes to make the trip. That's a heck of a lick - it would take you an hour in a car today even with the advantage of the dual carriageway over the summit and you wouldn't have seven intermediate stops to make either. Of course in 1861 'Darlington' for the S&D must have meant North Road and not Bank Top but even with a couple of miles saved it must have been an exciting ride bumping around in four-wheeled second class carriages with a William Bouch 4-4-0 banging away at the front of the train!
Posted by Iain Robinson at 00:08