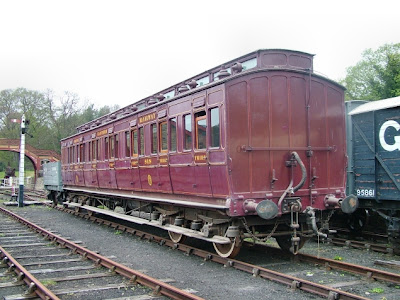 I was writing up a page for the main '150' web site today about David Bain's stylish coaching stock  used on passenger trains over Stainmore from the late 1890's until about 1945. Somehow I just missed riding in them, my earliest memories of travelling by train involve the later and more prosaic Thomson stock introduced in the late 1940's. But I guess some in the 'gang' at Kirkby Stephen East will remember riding in style in clerestory coaches in late LNER days.

David Bain left York in 1902 to go and work for the Midland Railway where he developed railway coaches very similar to those that he had designed for the North Eastern Railway.

A handful of these coaches survive. In August we are borrowing Diagram 7 No.818 from Beamish. I'm not sure if there will be any opportunity to ride in the vehicle but for the celebrations it will be marshaled next to '910' on the Darlington platform. It was sold on to the NCB by British Railways in 1949 and worked for years on miner's trains at Ashington colliery and so survived to be saved for preservation.

I am looking forward to getting a good 'gander' at No.818 and running a ruler over all that beautiful 'Crimson Lake' side panelling. Back in my garden shed in leafy Chiba Prefecture in Japan I have a stash of 'Plastikard' awaiting my attention this winter, and I am hoping to build a rake of at least four '0' gauge models of Bain clerestory coaches before I get back to Kirkby Stephen East again in Spring 2012.
Posted by Iain Robinson at 20:01